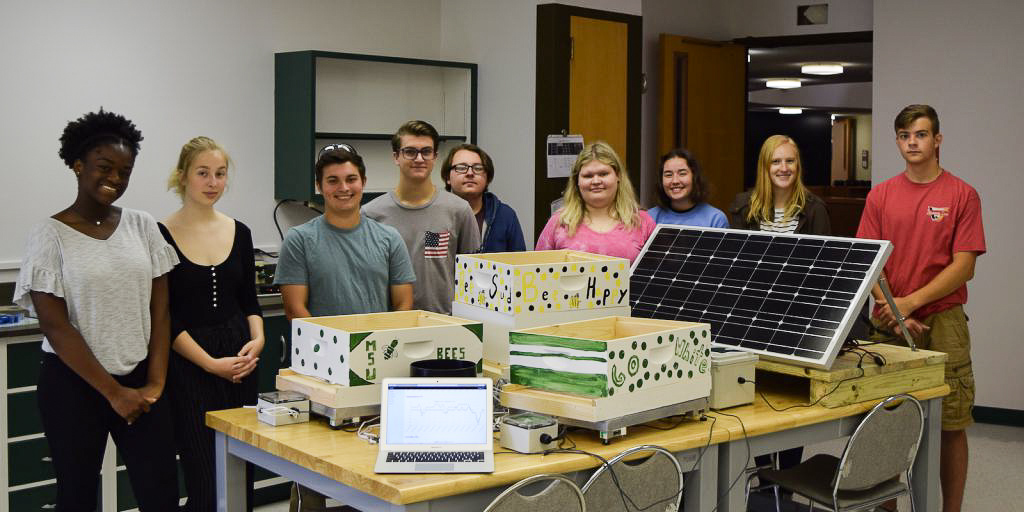 The honeybees have another ally on the MSU-St. Andrews campus; the Hive Tool Group. This group has focused on testing and calibrating sensors which will be placed inside St. Andrews’ beehives. These sensors will monitor the hive temperature, humidity, and weight. However, students are also evaluating ways in which to keep the sensors free of wax and comb which could potentially cause problems with the sensor function. In addition, students used a brood box to construct a frame that will mount on the surface of the bottom board detecting hive weight.

The bee monitoring system is composed of a Raspberry Pi, a small single board UNIX computer, for each bee hive. All sensors are connected to a Raspberry Pi module that is powered by batteries charged via solar panels. The system contains an additional Raspberry Pi that acts as a hotspot to provide internet access to the data collectors and researchers in the field. Students working on this project include; Caroline Czyzewski (Bay City All Saints), Sydney Gardner (Dow High School), Samuel Schmitz, Leah Hubbard (both from Freeland High School), Carter Zaluski, Ian Sanford, Aubrey Chambers, Adia Haynes (all from Midland High School), and Kendal Nelson (Standish Sterling High School).