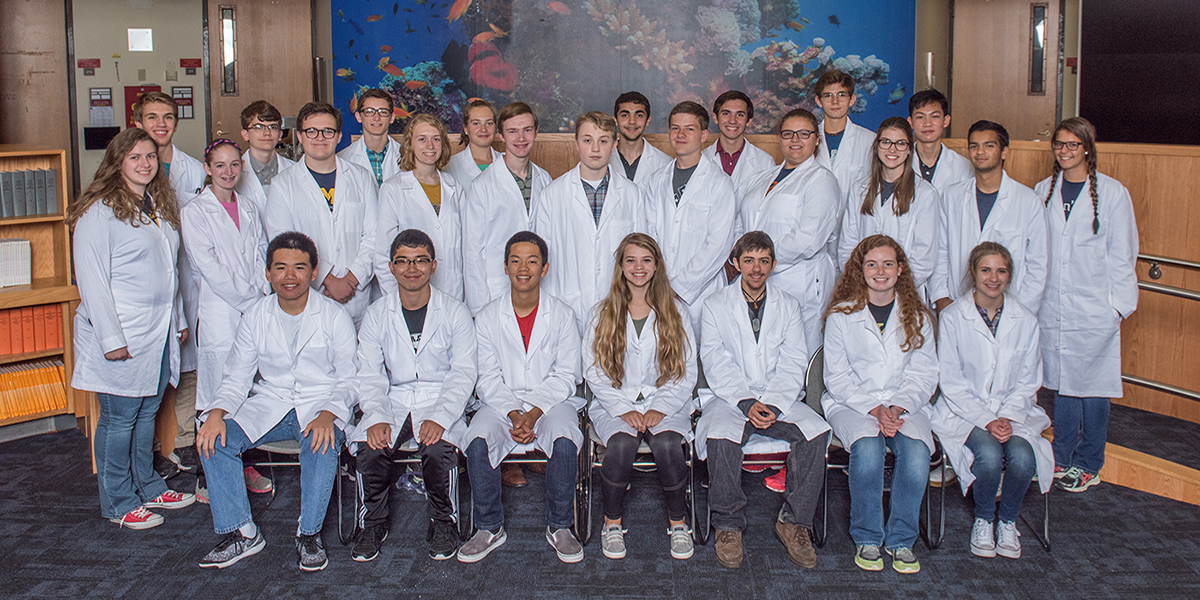 Twenty-eight high school interns from seven schools presented their research findings to an audience of their peers, families, and local supporters and scientists, at receptions held in their honor on Aug. 16-17. The students participated in a summer research program at the St. Andrews campus.

The internship program was created to provide high-level STEM learning opportunities for area students. Students conducted research in teams and were mentored by PhD researchers while working on real-world projects in sophisticated labs.

A new project, added for 2017, was computer programming.

Ten students spent the first few weeks learning the fundamentals of programming in PYTHON, then synthesized biodiesel and gathered NMR (Nuclear Magnetic Resonance) spectrum results from their samples. They then combined this knowledge to create and train a neural network to read the NMR data and identify biodiesel feedstocks.

“I enjoyed the summer internship because it challenged me and allowed me to work with a team to accomplish our goals,” said Naoki Kihata, a senior this fall Dow.

The Lewis acids team was led by Jack Kruper, PhD. The team synthesized a new poly-chlorinated compound and crystallized it for x-ray structure and determination. Student researchers on the project were Hannah Bartels (Midland), Kaylie Barton (Midland), and Aditya Middha (Dow).

Robert Bubeck and Tracy Zhang, both PhDs, worked on two projects with their interns: 1.) developing nanocarbon-containing ABS composites fabricated into parts via 3D printing, yielding roughly double the stiffness without an unacceptable decrease in toughness and 2.) creating low-cost humidity sensors with acceptable reproducibility and accuracy using 3D printing of conductive thermoplastics. The interns in this group were Michael Most, Wes Cummings and Stephen O’Donnell, all from Dow.

Adina Dumitrascu, PhD, and her team have been developing new chemistries and materials for redox flow batteries, which could someday be used for massive electrical energy storage, without the need for metals such as vanadium. Students were Ethan Bruce (Midland, Jessica Kline (Dow), and Dacia Munteanu (MSU).

The honey bee miticide project was offered again this summer through the continued research of Edmund Stark, PhD. This work assists the honey bee population through a polymer that slowly releases both formic and oxalic acids, thus allowing the miticides to kill Varroa mites (the honey bee’s worst enemy) over their entire reproductive cycle. The interns tested these polymers in the laboratory to determine their release rates, and began hive studies. Interns in this group included Jason Harnick (Bullock Creek), Kaitlin Gandy (Midland), and Yuen Azo (Saginaw Arts & Science Academy).

Brandon Zhu and Daniel Zhang (both from Dow) worked with their mentor, Pat Smith PhD, to research the composition and molecular weight of specific polymers for use in novel, time-released technology for possible use in pharmaceuticals. This team plans to compete in the Siemens Competition for Math, Science and Technology.

Student applicants were endorsed by their teachers and then selected through an application process conducted last April. The eight-week program ran from June 26 to Aug.18. This is the second year for the program; participation is up from 12 students in 2016.

Programming at St. Andrews is made possible through the support of The Dow Chemical Company Foundation.