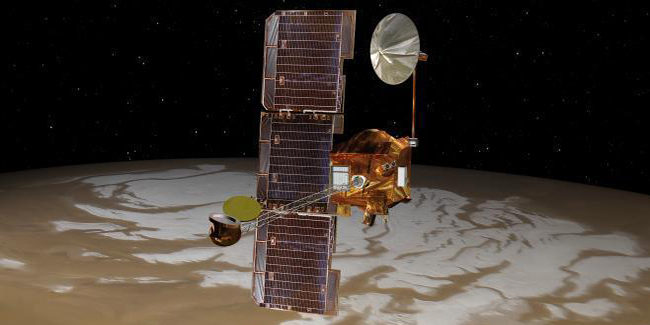 Mars from Space: What Robotic Spacecraft Have Discovered About The Red Planet.

Did you know that Mars boasts the tallest mountain in the solar system, and the largest volcano as well—even though the “red planet” is barely half the size of Earth?

Have you heard that Mars also has the longest canyon in the solar system—ten times longer than the Grand Canyon—yet it has no liquid water on its surface with which to create a canyon?  Are you aware that we have no fewer than six active spacecraft studying Mars from Martian orbit right now?  And that one Martian rover is still active, in its 9th year studying the surface?  Families with school-age and older children are invited to join us via Zoom for the October Family Astronomy Night to learn more!

In September we learned why Mars has been so important, and so controversial, for astronomers throughout the ages, and why people thought there would be life on Mars.

Now, in October, we will describe what modern astronomy has learned about the red planet.  Specifically, he will describe the numerous spacecraft orbiting Mars right now, plus the Curiosity rover that is still traveling on the surface.  What nations sent them?  (They’re not all from NASA!)  How long have they been there?  What is their purpose?  And most important:  what have they discovered?

As always, we will also show you how to find the planets and other cool things that are currently in the sky this month and next.  For example, have you noticed that Jupiter and Saturn are now closer together than at any time in the last 20 years?  Have you seen Mars in the east, shining even brighter than Jupiter?  Have you seen brilliant Venus lighting up the morning sky this fall, which it has been doing since summer?  Do you know where to find the meteor shower that’s already happening, and will be peaking in a few days?  We will help you see all of these things for yourself.