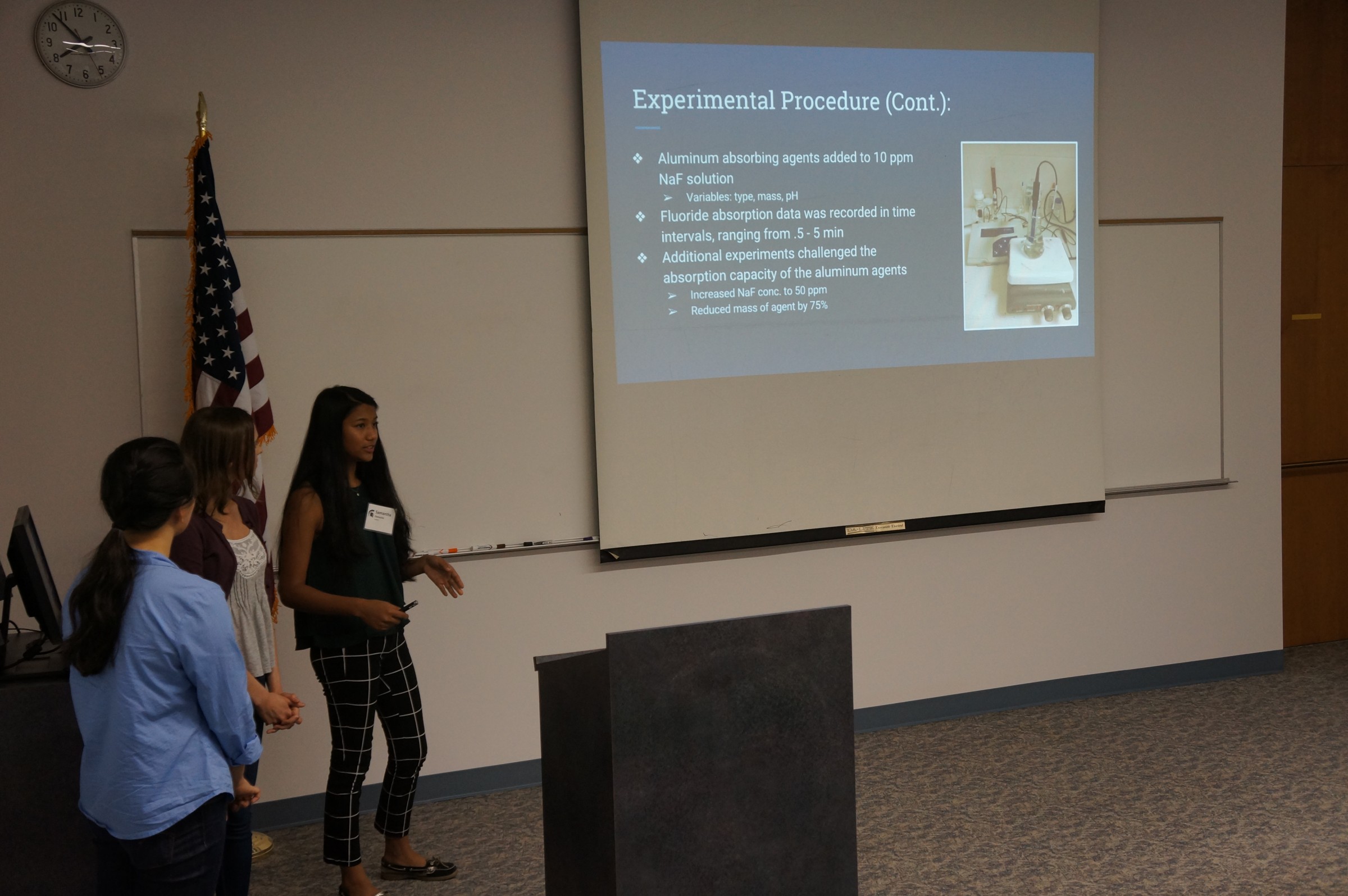 Parents, mentors and members of the community were treated to an evening of science when 12 summer interns presented their research project findings on August 18, 2016.

Students had applied for the internship positions in April, and were selected from a very competitive pool of Midland area high school juniors. After matching their experience and interests to the available projects, students were then assigned to a faculty preceptor who oversaw their summer research work. The presentations represented the outcomes of their 10-week projects.

Colony collapse in beehives is a national problem, and is often attributable to infestation of honey bees by the mite Varroa destructor. In-hive treatment of Varroa mites is often pursued with formic acid. In appropriate doses applied over many days, formic acid kills the Varroa mite without killing the honey bees, but excessive concentrations are fatal to both.

A former MMI employee, Dr. Stark – in collaboration with Dr. Patrick Smith and Dr. Daniel Henton – has been the beneficiary of grant support to MSU from Project Apis ($45 K) and the California State Beekeepers Association ($25 K). Using hyper-branched polymer technology, Dr. Stark has been developing the capability for time-release of formic acid, avoiding concentration extremes. In their internships, Ms. Evans and Ms. Szabo built apparatus to simulate hive conditions of temperature and humidity, permitting them to conduct successful multi-day assays of formic acid time-release from the hyper-branched polymer storage matrix. [Above: Ms. Szabo explains the simulation apparatus for formic acid assay.]

Mechanical, rheological, and other properties of system structural components are characterized in accord with standards set by ASTM and other standards agencies. The use of 3D printers to fabricate system structural components raises questions concerning the characteristics and reproducibility of the printed components, vis-à-vis those produced by other means, such as extrusion. The pigment, diameter, and added composites of the printing filaments pose additional complications in characterizing the properties of the printed components. Under the guidance of Drs. Bubeck and Zhang, Mr. Gustin and Ms. Mowry learned to print testing “blanks” in accord with ASTM specifications, and to conduct tests of the blanks with tensile strength, differential calorimetry, and other apparatus. [Above: differential scanning calorimetry by Ms. Kiley exhibits the thermal properties of a PLA composite filament containing bamboo.]

The possibility of lithium ion batteries failing catastrophically due to overcharge motivates the search for redox shuttle additives. The shuttle compounds are intended to act as the chemical analog of spillways in a hydroelectric dam. Dr. Dumitrascu and Dr. Henton have been working in collaboration with Prof. Thomas Guarr and co-workers at the MSU Bioeconomy Institute in Holland, MI, on the synthesis of target redox shuttle additives identified by Dr. Guarr for such batteries.

Ms. Duford and Mr. Lile worked with Dr. Dumitrascu on two candidate redox shuttle additives. In addition to learning synthetic methodology and the structural strategies to increase the oxidation potentials of the molecules, they learned to characterize the oxidation performance of the molecules once they were obtained in adequate yield and purity. [Above: cyclic voltammetry results obtained for one candidate redox shuttle molecule. The identity of the molecule has been redacted for intellectual property reasons.]

A Study of Fluoride Absorption from Groundwater

Although American jurisdictions often add fluorides to drinking water to promote dental health, in many tropical parts of the world the opposite problem arises: i.e., an excess of fluorides in drinking water, giving rise to skeletal fluorosis in humans and animals. Estimates suggest that over half the population of India may be exposed to fluoride above safe levels. Hitherto, the (inadequate) removal method of choice has involved the use of bone char, to which religious objections can be raised in various populations.

In an attempt to find an economical method to reduce waterborne fluorides – particularly in non-electrified regions — Dr. Henton has been working with MSU staff and Aqua Clara International at the MSU Bioeconomy Institute in Holland, MI. Dr. Henton has focused on the use of aluminum as a complexing agent in a two step process: fluoride removal occurs in the first and residual aluminum removal in the second. Ms. Damocles, Ms. Spencer, and Ms. Wang worked on optimizing pH and temporal conditions under which various forms of aluminum (powder, foil, metal strips, alumina) removed carefully quantitated fluoride from water. Alumina was the most effective choice for fluoride removal. They also demonstrated that low pH maximized fluoride removal but increased aluminum to be removed in the second step, creating an engineering trade-off. [Above: a sample plot of fluoride removal over time for three separate pH values of the water.]

In the project described immediately above, aluminum was used to remove fluoride from drinking water. Because of the necessity to design effective, economical, and non- electrified filters and to minimize the need to remove most residual aluminum after fluoride removal, attention in this project centered on understanding the nature of the aluminum-fluoride complexation, with 19F nuclear magnetic resonance (NMR) as a principal analytical tool. With the guidance of Dr. Henton, Ms. Fleming, Mr. Kim, and Mr. Winton learned the fundamentals of NMR, including the more common proton and carbon forms as well as 19F.

In the students’ own words, they “made A LOT of samples with Potassium Fluoride (KF), Sodium Fluoride (NaF), and Aluminum Nitrate Nonahydrate (Al(NO3)3●9H2O) in Deuterium Oxide (D2O).” From their NMR and other analytical work, they reported that “we found that there are 3 main species present: AlF+2 AlF2+ and AlF4- . … We were surprised that there was no evidence of AlF3, being the neutral species, in the spectra.” They concluded that “AlF2+ and AlF4- must then be the preferred” ions persistent in the water. [Above: this project included careful analytical work in the laboratory before 19F NMR spectra were taken.]

During the course of their summer internships, participating students in the Michigan State University STEM Research program took part in many different activities and objectives, to boost their credentials and enhance their scientific skill sets. Located in Midland, Michigan, the program gave its twelve applicants the tools and guidance to achieve the following:

More recently, several of the students have solicited letters of recommendation from their mentors, in support of their college applications. [Above: Photo of the full set of interns touring at the MSU Department of Chemistry.]