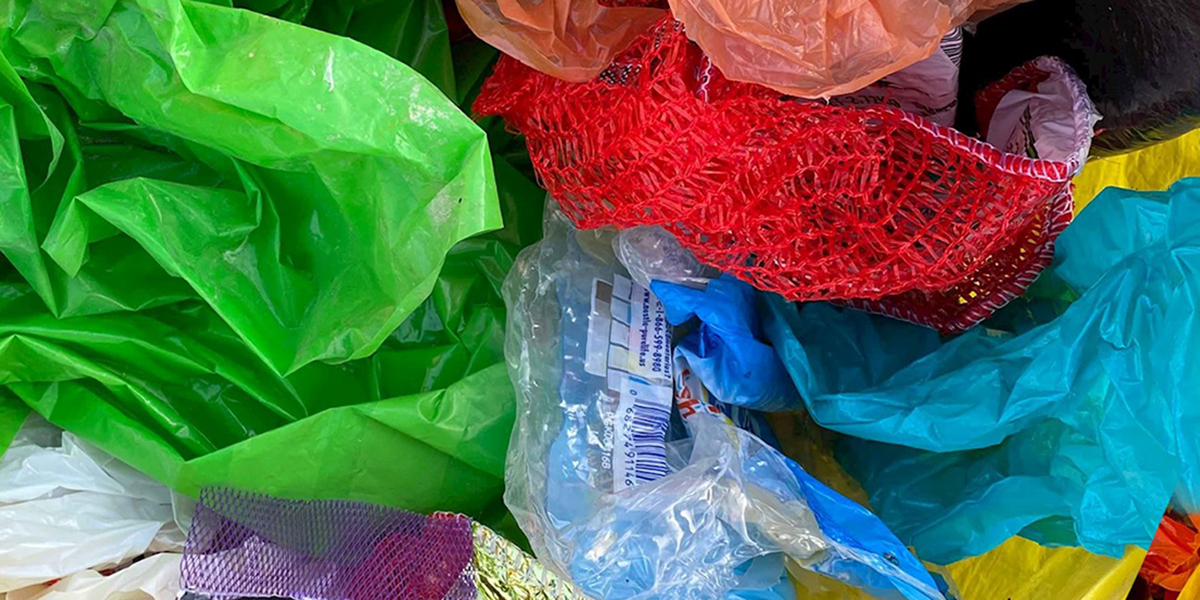 “Waste not, want not” was planted firmly in John Dorgan’s ethos as a kid, watching his father pull nails out of old boards for reuse.

In that spirit, Dorgan and a team of Michigan State University researchers are pursuing the “upcycling” of commonly disposed plastics such as grocery bags into higher uses with funding from a $2 million National Science Foundation grant.

“We don’t want plastics to end up in the landfill. That doesn’t make any sense to me,” said Dorgan, the David L. and Denise M. Lamp Endowed Chair in Chemical Engineering at MSU. “It’s almost gluttonous the way we use some of these materials. We can bring in some American frugality.”

Less than 10% of America’s plastic waste gets recycled. That means more than 90% of it becomes garbage, often after only a single use.

There are many reasons for this lopsided ratio, but one driver boils down to economics, Dorgan said. Manufacturing using new, high-quality plastics made for a specific application is often cheaper than using recycled plastics originally designed for something else. The Spartan plan would help change that.

Akin to Dorgan’s father pulling nails from boards, the MSU team wants to pull useful molecular building blocks from low-cost plastics commonly thrown out. The team will then give these building blocks new life in more valuable materials.

In particular, the team is targeting polyethylene, a widely-used plastic that’s found in single-use grocery bags, for example. The project’s goal is to break down the polyethylene, then chemically resurrect it as a more valuable material, such as nylon used in carpets, sporting goods and even automotive parts. This value-adding reincarnation is called upcycling.

“What we do now is mostly downcycling,” Dorgan said. When plastic is recycled, it usually ends up being less valuable, pound for pound, than when it started.

For example, polyethylene recycled from plastic grocery bags frequently reenters the world as plastic lumber used in park benches. Although it’s a good use, this kind of recycling is an overall value loss, Dorgan said. Going to nylon instead would flip that script: One pound of nylon can be worth more than five pounds of recycled polyethylene.

“We can still preserve the environment and make jobs with plastic lumber,” Dorgan said. “But upcycling is the holy grail of plastics recycling technology.”

Reaching such an ambitious goal takes teamwork, so Dorgan recruited an array of Spartan experts.

“John put together a multidisciplinary team to address a really challenging but critical problem that society is facing,” said team member Eric Hegg, a professor in MSU’s Department of Biochemistry and Molecular Biology. He’s also seen such multidisciplinary efforts succeed before as a researcher with the Great Lakes Bioenergy Center, which is funded by the U.S. Department of Energy and administratively led by the University of Wisconsin-Madison with MSU as the major partner institution. “With any grand challenge, having a team that can attack the problem from multiple angles is essential,” Hegg said.

“MSU has a fantastic environment for these types of collaborations” added Hegg’s departmental colleague Danny Ducat, an associate professor who is also a researcher with the MSU-DOE Plant Research Lab. “In my experience, MSU’s culture really promotes and encourages researchers to venture out of their niches and work toward something larger.”

On the new grant, Hegg and Ducat are deploying chemistry inspired by nature to find new ways to break down polyethylene. The team’s attempting to take advantage of proteins called enzymes that help with natural metabolic processes.

Compared with current plastic recycling practices, enzymes could be more economical in producing more of the desired molecules because they work under milder conditions. The boost in efficiency and drop in energy usage could lead to cost savings.

Because polyethylene is a relatively new invention, nature has not yet evolved enzymes that can efficiently break it down. So the researchers will have to provide an assist with new chemistry that can be scaled up economically and sustainably.

“It’s a challenge if you want something that’s economically feasible and environmentally sustainable. And it has to be both,” Hegg said. “If it were an easy problem, people would already have already solved it.”

To monitor how cost effective and ecofriendly the new techniques are, the team has enlisted Assistant Professor Annick Anctil, a life cycle assessment expert in the Department of Civil and Environmental Engineering. Anctil is also working with Dorgan on a separate, DOE-funded project in plastic recycling that focuses on improving sorting and cleaning.

For the NSF project, though, she’ll be quantifying not just the cost and potential value of a new process, but also its energy and resource usage. This will reveal how cost-effective any new technique is and show its environmental impact by accounting for factors including water usage and carbon footprint.

“We’re told that recycling is good for the environment, which is true, but we’re looking at how good is it. Under what conditions? And how can we make it better?” Anctil said. “If we’re creating something new, it should be better than the old way.”

The team’s plan and goals address everything that NSF program director and lauded chemical engineer Christina Payne had hoped to see in a grant proposal. “John’s project was really one of the stars,” she said.

Beyond the science and systems-level approach, Payne was also impressed with the Spartans’ initiative to engage underrepresented students in science and technology by recruiting research aides from Michigan’s tribal colleges.

“These students are integral to the project,” said Robert Ofoli, a co-investigator on the grant and an associate professor in MSU’s Department of Chemical Engineering and Materials Science. “We’re not telling them, ‘Go do A, B, and C and then give us the results.’ We’re telling them, ‘Help us figure this problem out.’”

Empowering the students isn’t just good for the research project, Ofoli said, it will hopefully cement a sense of confidence that they can succeed in scientific and technical fields. “When they leave, they are going to take something with them: new capabilities, new ideas and a new belief in themselves.”

Also helping on the grant project is the National Renewable Energy Lab, which Dorgan refers to as the nation’s intellectual center for plastics recycling challenges. The average recycler can chip in, too, with some small but meaningful steps.

First, clean your plastic before you recycle it, Dorgan said. Then keep recycling using the resources and services available in your community. For example, he said, MSU Recycling offers recycling guides and a public drop-off.

“Please make sure you that you recycle your plastic,” Dorgan said. “Because the team at MSU is figuring out great things to do with it.”